Without a motor, your electric skateboard won’t go very far. It might power on and make some noises, but it won’t actually go forward. Picking the right motor is extremely important. When it comes down to choosing a motor, it might be a little confusing with all the different sizes and brands. To make it simple, it’s necessary to grasp some related knowledge about motors.

An electric motor is an electrical machine that converts the electrical energy into mechanical energy. Most electric motors operate through the interaction between the motor's magnetic field and electric current in a wire winding to generate force in the form of rotation of a shaft. Electric motors produce linear or rotary force (torque). Basically, the motor of an electric skateboard is going to be the main determinant of your speed and torque.

Rotor- In an electric motor, the moving part is the rotor, which turns the shaft to deliver the mechanical power. The rotor usually has conductors laid into it that carry currents, which interact with the magnetic field of the stator to generate the forces that turn the shaft.

Bearings- The rotor is supported by bearings, which allow the rotor to turn on its axis. The bearings are in turn supported by the motor housing. The motor shaft extends through the bearings to the outside of the motor, where the load is applied.

Stator- The stator is the stationary part of the motor’s electromagnetic circuit and usually consists of either windings or permanent magnets. The stator core is made up of many thin metal sheets, called laminations. Laminations are used to reduce energy losses that would result if a solid core were used.

Air gap- The distance between the rotor and stator is called the air gap. The air gap has important effects, and is generally as small as possible, as a large gap has a strong negative effect on performance. The magnetizing current increases with the air gap. For this reason, the air gap should be minimal. Very small gaps may pose mechanical problems in addition to noise and losses.

Windings- Windings are wires that are laid in coils, usually wrapped around a laminated soft iron magnetic core so as to form magnetic poles when energized with current.

Commutator- A commutator is a mechanism used to switch the input of most DC machines and certain AC machines. It consists of slip-ring segments insulated from each other and from the shaft.

Electric motors can be classified into DC motors and AC motors based on the working principle and both of them can be further divided. Clear classification is shown in the figure below.

DC motors were the first type of motor widely used and the systems (motors and drive) initial costs tend to be typically less than AC systems for low power units, but with higher power the overall maintenance costs increase and would need to be taken into consideration. The DC motors speed can be controlled by varying the supply voltage and are available in a wide range of voltages. The two common types of DC motors are brushed motors and brushless motors. Brushed motors function by generating magnetic fields whose opposition and attraction keep the central rotor turning. On the other hand, in a brushless motor, the positions of the electro-magnetized coils and the stationary magnets are inverted— the coils are situated in the surrounding casing and the magnets are in the rotor.

Brushed motors will be a better type of system for those who are more interested in taking their electric skateboard off-road or down and around rocky or uneven trails. They tend to work much better under “severe” conditions. These types of motors are much cheaper to build, rebuild and maintain. However, the brushes in the motor are going to require periodic maintenance. When your electric skateboard begins to get to those high speeds, the brush friction accelerates will begin to reduce the amount of torque. This is eventually going to lead to your brushes wearing out and in need of mending. On the contrary, brushless motors require no maintenance of brushes and top speeds can be reached with full torque. Of course brushless motors are much more expensive than brushed motors. Also the electric controller required can be expensive to keep and maintain.

The rated power of refers to the highest power input allowed to flow through the motor, that is shaft power, also called the capacity, which is the characteristic parameter of the motor. Rated power limits are usually set as a guideline by the manufacturers to protect the motor.  This the most important indicator to quantify the load ability of the motor and it’s also the parameter that must be provided for motor selection.

The rated voltage is the voltage at which the motor was designed to operate. Each AC motor is designed for optimum performance with a specific line-voltage applied from the electrical system. Many motors may have a dual voltage rating indicating it can be used on either of the given voltages with the proper wiring connections. For instance, the dual 230/460 rating indicates this motor was designed for use at either 230 or 460 volts.

“Kv” refers to the constant velocity of a motor (not to be confused with “kV”, the abbreviation for kilovolt). It is measured by the number of revolutions per minute (RPM) that a motor turns when 1volt is applied with no load attached to that motor. The Kv rating a brushless motor is the ratio of he motor’s unload RPM to the peak voltage on the wires connected to the wires. Knowing the Kv ratings of a motor will help you determine how fast that motor will rotate when a given voltage is applied to it. A change in voltage will change the rpm and will require changing the propeller to avoid overloading the motor.

The average Kv range for an electric skateboard is between 180 and 270. For motors with 3000 KB rating, those do not work and most of those motors are designed for model airplanes and stuff like that. The Kv rating of a motor determines the amount of torque and top speed your motor will have. The lower your number of the Kv rating, the more torque you’ll have. The higher the number, the more speed you’ll have.

The size of skateboard motors are indicated by four numbers. For instance, a 6355 motor basically means it’s 63mm wide and 55mm tall. There are lots of other size numbers that will pop up when you’re looking for electric skateboard motors. What those numbers mean is just the width and length of the motor. The size of the motor determines how powerful your motor will be. Just remember that the bigger those number are, the more torque you will have and more powerful that motor is. 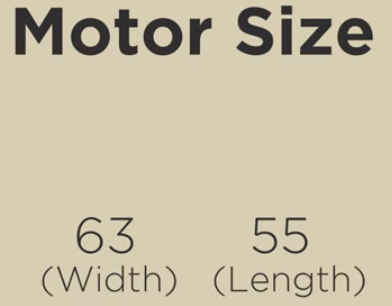 A lot people maybe wonder what is the best motor for an electric skateboard. Actually there is no best motor, because everyone has different requirements to the electric skateboard. Some people want the fastest board. Others may want a really long range. Also a few people just want a really quiet board. Basically you know who you are and you should be able to make a decision based on your preferences.